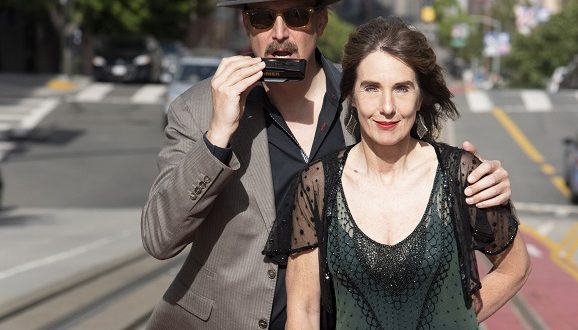 Winners of 5 Independent Blues awards in 2021, Vizztone recording artists Cathy Lemons & Phil Berkowitz are San Francisco’s premiere male/female duo-fronted band. Their music is a throwback to the blues, rock, gospel-soul, and country that emerged in the late 1960s. Their impassioned vocal performances, electrifying musical interplay, and Phil’s powerful harmonica garnered them six national awards and 20 award nominations since 2015. Accompanied by a dynamic five-piece ensemble, they have earned a reputation for a sizzling hot stage show, working with some of the top musicians in the business.

Described as “the finest light-skinned female blues vocalist in the U.S” [Real Blues – 2010], fiery Dallas-born entertainer Cathy Lemons has a velvet voice with a gritty edge and the rebel conviction of a woman risen from the ashes. New Jersey native Phil Berkowitz “has earned renown as one of the West Coast’s most distinctive harp players, as well as for his sharp, resonant tenor” [Living Blues – 2018]. The stark contrast between incandescent Lemons and elegant Berkowitz makes for a captivating musical union, breathing new life into American songwriting tradition and the vanishing art of duet singing.

Fans of Dinah Washington and Brook Benton will love them!

Opening the show will be Gainesville’s own Just Maybe. Just Maybe plays a wide selection of songs from all styles for all tastes, but will be playing a strictly Blues show for this event. Just Maybe definitely features female lead vocalist Ellen Donovan and three male vocalists and instrumentalists: Richard Ritari (bass), Steve Kattell (drums), and Joseph Breeden (guitar).

General admission is $15, and NCFBS members get in for $8!