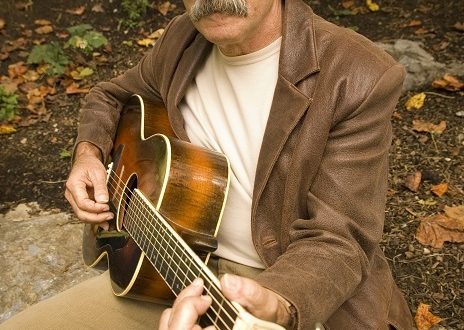 Roy Book Binder is the epitome of the singing, songwriting, storytelling Bluesman troubadour. Binder from the early sixties became a student and friend of the legendary Reverend Gary Davis, who he toured with in the late 1960s, and it was from these early days he became equally at home with Blues and ragtime.
At the age of 76, he is known to shift from open tunings to slide arrangements set to his original and sometimes quirky tongue-in-cheek compositions, with both traditional and self-styled licks, drawing on many musical influences. He combines his Blues with Hokum, Dixie Jazz licks, and Old Timey acoustic Hill Country music with ease. More than anything, however, his storytelling style is what he is most renowned for. The Sydney Morning Herald in Australia said “the stories are as good as the songs”. Binder is a master of the Piedmont style as well as Delta blues. He is also well known for his wry and autobiographical songs.
In the 1990s he often appeared with Jorma Kaukonen (Jefferson Airplane, Hot Tuna), who recorded two of Roy’s songs. He’s been featured on a PBS special and interviewed by Terry Gross on “Fresh Air.” Who else can say they were friends with the Rev. Gary Davis, Pink Anderson and Robert Lockwood? And toured with Arthur Big Boy Crudup, Hot Tuna, JJ Cale & Bonnie Raitt? Roy borrowed from his heroes to become a distinct voice in the Blues and Folk music world. He has the stories, the licks, and the mystery of timeless music in his fingers.
Find out why Blues & Rhythm magazine called him a “master storyteller who can really crank out the Blues”!

Paco, who has been playing in Gainesville for many years, was an obvious choice to open for Roy. His style is difficult to categorize and uniquely his own. The most recurrent comment you’ll hear from guitar players in the audience is that he plays chops that you don’t hear from anybody else. His vocals have an ease and sincerity which makes him relatable to practically every audience. Although he plays many genres, he always seems most at home playing the Blues. He is currently the lead guitarist with Little Mike and the Tornadoes as well as the Blues duo Crosseyed Cat.