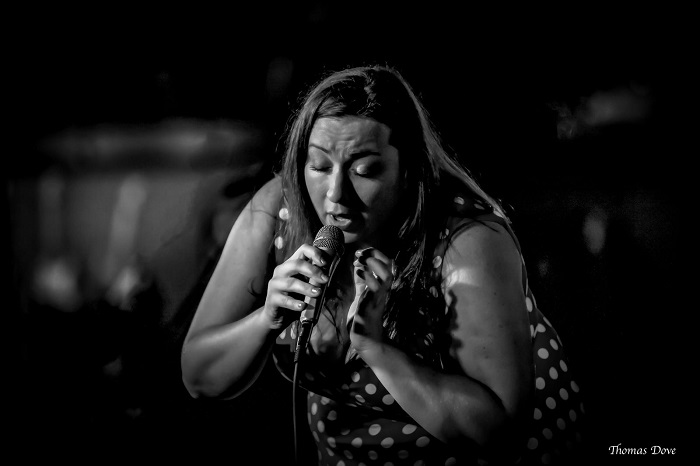 The North Central Florida Blues Society is happy to announce that Gracie Curran & The High Falutin’ Band will be the headliners at the free Downtown Blues Concert at the Bo Diddley Community Plaza on Friday, November 10, to kick off the Downtown Festival & Art Show weekend.
Boston native Curran has rocked houses all across the country, becoming a crowd favorite known for not only her amazing voice, but her comedic stage banter and hugely entertaining live show. Her unique presence and ability to connect to any audience led her band to be named Boston’s Best Blues Band in 2012 and garnered a 2014 Blues Music Award Nomination for Best New Artist. Along with a stunningly soulful voice, Curran’s trademark is her infectious, whoop-it-up enthusiasm that draws people in and shares the good time that she is clearly having.
“It’s about sharing the things that sit deep in your soul. It’s unfiltered”, Curran said “It’s as honest as you can be with yourself and that’s a very powerful thing.”
Blues Blast Magazine called her a “powerhouse” and said “Occasionally a vocalist comes along with such a presence that they command everyone’s undivided attention. Talent as seen here deserves to be heard. With the right exposure, this band should have no trouble in attaining the success that they truly deserve.”
And while the key that drives the praise of this band is Curran and her sultry smooth voice that has brought comparisons to Blues sirens and Soul giants of the past, her backing band is also extremely tight and versatile. Together they make earth-shaking and groove-making Blues that is a guaranteed crowd favorite.
Curran takes the stage at 9 pm, with Mr. Aullie (7 pm) and the DevilJays (8 pm) opening the show by virtue of winning the 2017 North Central Florida Blues Society Blues Challenge.