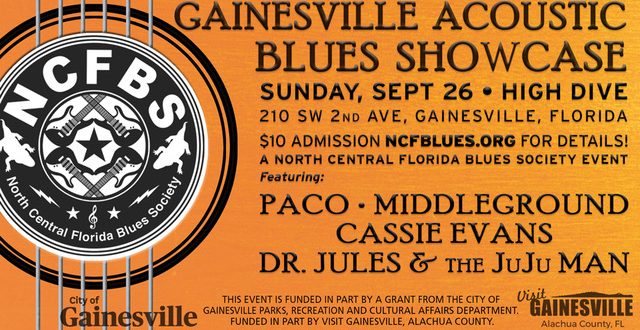 Cassie Evans is a singer-songwriter hailing from Alachua, FL. Her stunning vocals, soulful lyrics and wonderful charisma have been charming audiences for years. Cassie is also an accomplished guitarist whose original compositions compliment her acoustic talent. Her music is inspired by Blues and folk influences. Backporch all the way but never basic, Cassie’s music is wonderfully sultry and perfect for a front porch or a sold-out auditorium. “Cassie is a fresh voice to the blues genre. With the ability to adapt to any audience and to make a song her own, she will keep the attention of any audience. Cassie is a breath of fresh air when it comes to an artist in today’s music industry.” — Justin Nelson, AJ Entertainment

Also performing will be Dr. Jules & the Juju Man. After failing to catch on in Nashville as the “Weird Al Yankovic of Country Music”, he moved to the Hill Country of Texas and discovered the Blues. Dr. Jules Gliesche has been on a crusade to preserve the Blues and spread the sound, with three CDs of original material and a fourth on the way, often with skeptical and humorous lyrics. Always expect Dr. Jules to always give you something unique and always give you BLUES. Lothar Weimann is a renowned guitar maker and guitar player that fronts JuJu Junction and was a 2017 International Blues Challenge participant.

Paco’s style is difficult to categorize and uniquely his own. The most recurrent comment you’ll hear from guitar players in the audience is that he plays chops that you don’t hear from anybody else. His vocals have an ease and sincerity which makes him relatable to practically every audience. Although he plays many genres, he always seems most at home playing the Blues. He is currently the lead guitarist with Little Mike and the Tornadoes as well as the Blues duo Crosseyed Cat.

The duo Middleground consists of Barbara and Mark Armbrecht and is the product of over 40 years of collaboration between these two professional musicians. The music has evolved over the years to now include an eclectic mix of folk, pop, blues, ragtime and classic favorites, all of which have been flavored by Barbara’s finger picking style, use of open tunings and occasional use of slide and supported by Mark’s solid and expressive bass technique. Prior to moving to Florida and forming Middleground, both Barbara and Mark appeared on Jamboree USA, a weekly live radio broadcast of country music featuring the top country artists of the day and second only to the Grand Ole Opry in Nashville in status. They also appeared several times on Jamboree in The Hills, the largest country music festival in the country and played to an audience in excess of 100,000 people. Middleground was an International Blues Challenge participant in 2013. Barbara also competed at the International Blues Challenge in 2015 as a solo performer.

Also, there will be a silent auction with great items to support the North Central Florida Blues Society!